On Sunday 10 March 2019 we launched our Year of Creation under the hashtag EcoChurch. It was a joyous service, featuring a song (Beautiful World – P Field) and poetry by our children and young people, a sermon by Rev Sue, and the presentation of our Bronze EcoChurch Award by Bishop David. The serve concluded with a competition launch – to make the heaviest EcoBrick by Palm Sunday to be used to build a Forest Classroom in the grounds of the Bishop of Salford’s residence. 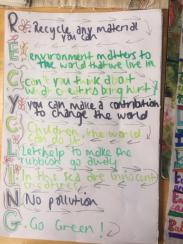 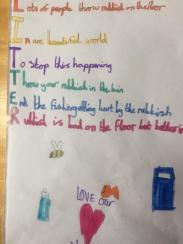 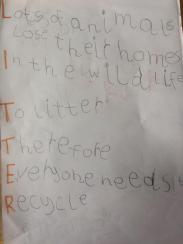 Today’s sermon refers to the video http://operationnoah.org/resources/salote/ which was shown in St Margaret’s as an introduction.

Jesus was in the desert. He hadn’t eaten for 40 days. To be fair, that was the time he has set himself as a fast, and now he could eat again. He was very tired, and it was quite a way to somewhere he could buy something to eat. So maybe, just maybe, he could create some bread. Or at least turn a few stones into bread. It would be good practice for the powers he was beginning to realise that he had. And there were so many hungry people. The disabled ones, the widows with children but no husband to earn a wage. The foreigners that people didn’t want to employ. He could help them. He could bring them what they needed. But he realised that wasn’t enough. People need more than food and drink. They need to hear about the kingdom of God. Jesus mission wasn’t just about meeting people’s needs. It was about new life, a new relationship with God. There were no short cuts to popularity. People needed a radical change of heart.

Now there is nothing wrong with giving food to hungry people. We must do that. It is right and compassionate, but it is not enough. And Jesus calls us to care for his creation, and he wants us to have a radical change of heart. It’s not just about recycling, remembering to take a bag when we go shopping and buying fair trade coffee. These things are all important, but we need to go further. We must show respect to our planet and its resources. We need to squarely bring our concern for the environment into all we do in our everyday lives.

The second temptation Jesus had to face was to become a worldly ruler. He could be an emperor, rule with wisdom and justice and make the world a better place. Everyone who obey his laws.  But again, that was not the kingdom of God coming into the hearts of his followers. Jesus wanted them to truly worship God, not to be law keepers who did as they were told, however good the laws. To leave it to the government to make laws about clean air, recycling and clean electricity is not enough. Because Money has become a false god. Economic growth is the holy grail and shareholder profits must keep steady. Multinational companies have now more power than the kings of old ever did, and while their goal is to sell their products at all cost the planet will continue to suffer. We must challenge not just the actions of our politicians, but their fundamental beliefs about what is important for our world.

The last challenge for Jesus was to throw himself off the temple, so that he could be absolutely sure that he was right. He could never doubt God again if he was saved from certain death falling from a great height. Others would see, too, and they would know that he was the sent by God. But what God wants from us is faith and trust. He does not force us to believe by demonstrating his powers – what would that belief be worth? He wants loving trust. And he wants responsible behaviour. To carry on as we are is indeed to put God to the test, if we think that some miracle of science will save the planet soon. We are very close to destroying ourselves and our planet – we must not put God to the test by expecting to be bailed out.

Salote’s previously idyllic world is fast becoming a dangerous and unhealthy place, with no work no food and no education to help the children learn how to solve the issues. We are lucky – we have children who care about our planet and who want to protect it. We owe it to them to see through the temptations of easy solutions, allowing vested interests to manipulate us and not intervening in the hope that something will turn up. We must change our lifestyles and our attitudes before it is too late.