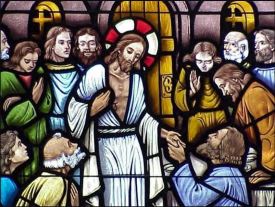 This sermon was given by our Curate-in Training, Sue, on Sunday 8 April 2018.

Picture the scene. It’s the Sunday after Jesus appeared to Mary in the garden, and then to the disciples in the house. They are there again, talking excitedly about what might happen next. Except for Thomas who is sitting in the corner with his head buried in his hands. Thomas suspects that the others have all gone mad. He saw Jesus die on the cross, and then receive a thrust from a spear that by itself would be more than enough to kill a man. And if the others saw Jesus a week ago, where has he been since? He feels bewildered and isolated. Suddenly he looks up and Jesus is standing there before him. He is dressed in white, his body washed and his hair combed the way the women prepared his body for burial. But his hands have the wounds where the nails were driven in, and there is a gaping hole in his side, half visible behind the draped robe. He speaks “Shalom”. Thomas utters the first words that come to his mind “My Lord and My God”.

Have you ever wondered why Jesus risen from the dead still bore the wounds on his hands, feet and side? Shouldn’t a resurrected body be beautiful and perfect? What about us – when we are raised from the dead will our bodies be perfect, or will they bear the scars that tell the stories of our lives?

Jesus suffered a humiliating and shameful death. He was stripped of his clothes and crucified with a thief and a murderer while people watched and mocked. He was forsaken by his friends. And yet he chose to bear the scars on his risen body. Shame was heaped on him, yet he wasn’t ashamed.

For many that is a difficult lesson to learn. Let me read you the story of Jennifer,  a young woman suffering from anxiety and depression who began to self-harm at the age of 16. At the age of 26, she wrote in a website article:

A man named Jesus was once crucified on a cross. Nails bore into his hands and feet, a crown of thorns pressed into his temples, and a sword pierced his side. Upon being resurrected, he could have easily come back in an untarnished, omnipotent body that removed all trace of scarification. After all, he is God. But he showed the wounds and scars on his hands and side to the disciples as a sign of proof and out of pride — the ultimate description of God’s manifestation of love for us. It was a reminder of the pain he had gone through for us.

No longer will I be embarrassed by my scars, or my past, or my mental illnesses. I refuse to lie to the face of other people, even if it makes them uncomfortable to hear the truth when it shouldn’t. I won’t worry when I wear short-sleeved shirts in front of people I’ve just met. From now on, I too will show my scars as a sign of how I overcame — and still overcome — the pains and struggles I face through my mental illnesses.

Jennifer, and that is her real name, sees the wounds on Jesus’ risen body as reminders, not of our sin, but of his love that overcame it. And she refuses to be ashamed of her own past but takes pride in the way that she has pulled through. And she hopes to communicate to others suffering from mental illness that they will be loved, not blamed.

That first step of exposing our shame to another can be the beginning of healing. Each week I go into Strangeways and work as a counsellor with prisoners there. When they were tried they were advised about the best way of presenting their case – honesty was not necessarily wise. Their nearest and dearest, very often, choose to believe they have done nothing wrong. Almost everyone else condemns them. So no-one has seen them as they really are. Because I am not part of the system,  what they tell me will have no consequences, good or bad. Because I do not judge them, they can be honest with me, and so they can find the healing that exposing oneself to another human being and finding warmth and acceptance can bring. I don’t pretend that miracles happen, but there are steps in the right direction. Many Christian traditions recognise the need to share our failings with others. In the early days of Methodism when there were classes that met together to talk about their spiritual progress, and in Roman Catholic churches there is the Sacrament of confession where individuals regularly visit a priest. To insist on practices like these for everyone runs the risk of the process becoming formulaic and artificial, but we should not throw out the baby with the bath water. Many Christians feel the need to be seen and understood by someone else. For some, spiritual direction provides the opportunity for a healing relationship. They see someone every few months to talk about the deep things of life. Some people call it spiritual accompaniment or meeting a soul friend, for in fact there is more listening than advice. Often the relationship continues for years and provides that opportunity to be truly seen, known and accepted.

Jennifer wrote her article to challenge churches to become loving and accepting communities, places where we dare to let others see our real selves, warts and all. Before the gospel, we heard the reading from Acts which gave us a glimpse of church at it’s very best, full of love and grace. The Bible doesn’t try to hide the fact that the disciples had been disloyal and cowardly, but they were transformed from the defeated men cowering behind a locked door into the apostles proclaiming the good news of the resurrection. In their encounter with the risen Lord, they had put their shame behind them to live a new life in Christ, not claiming to be perfect, or even good, but to be loved, accepted and forgiven. 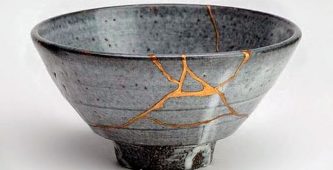 To be human is to be flawed, and in this lifetime God’s work in us will always be incomplete – our imperfections are a sign that we are a work in progress.  We began with the image of the risen Christ, let us end with a different picture. Kintsugi is a Japanese art form where broken pottery bowls are mended with gold to produce an object far more beautiful than the original. The cracks become the opportunity for individuality and loveliness. Leonard Cohen put it slightly differently:  Forget your perfect offering. There’s a crack in everything – that’s how the light gets in.