The 9.45am service at St Margaret’s began with an Act of Remembrance, in which the names of all the fallen from our parish were read out and remembered:

Who uses a diary to remember things? A phone? Post it notes? Now for confession time – who remembers by writing on the back of their hand? (Each of these items shown in turn).

We use all kinds of strategies to remember things –  because remembering is important. It shows respect for the person and the event that we are wanting to remember, to forget something reflects badly upon us and might be seen by others as not caring.

In recent weeks you will have seen many people wearing poppies as a symbol of Remembrance. Let us have a think about that symbol and what  remembering is all about.

Three helpers each revealed and added one petal of the poppy to the plain black disc at the centre and the lettering on each petal is explained as each petal was added.

RE: The letters RE can mean to refer to something again.

Can you think of words beginning with “re”  that might  give us a sense of that? The congregation came up with re– do, re-think, re-vise, re-pent etc.

MEMBER: membership. Means belonging. We are members of many groups and organisations in our lives—our families, school, workplace, clubs, groups of friends etc. Today we particularly  reflect upon being members of our own country, we reflect  upon all  the service      personnel who bravely served their country in such  different ways  – millions paying the ultimate sacrifice of giving their lives or their health to defend what is right and true.

It is now more than 100 years since the start of the First World War. We remember and honour, along with the huge losses of human life  as well as the service and sacrifice of those serving in the many conflicts that Britain has been involved in since then.

ING – When we add the letters ING on to a word, we make the action active and on-going. Doing, saying….it is present and can carry on into the future. By remembering, we are actively choosing to do so. It is ongoing and implies continuing into the future. I have been struck by, when school groups visit our church, there are often one of two children who start to look for their relative on the plaque on the wall. They have been taught about the importance of remembering and owning the connection with a relative that they never met. It is both poignant and heart warming.

The helpers return to their seat and the poppy is placed before the altar. 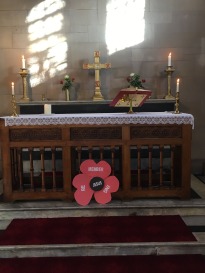 The poppy has become a key symbol to help us to remember all those who have been killed or injured in conflict on behalf of the country. Why a poppy? Because when soil is disturbed, scarlet poppies naturally grow and did so on the battlefields of Northern France and Flanders in the first world war—just as this natural phenomenon had been observed on the battlefields of the Napoleonic wars.  The scarlet  has come to symbolise the blood of the fallen and injured and their sacrifice for future generations.

We, in the Christian church also have a symbol. It is the cross of Jesus where his blood was shed to achieve new life for us all.  Two great symbols of sacrifice and blood shed. The poppy and the cross.

In John’s gospel we are told “Greater  love has no-one than this, that he lay down his life for his friends”.  In the first world war, soldiers were issued with John’s gospel  and encouraged to read it. John’s gospel is special because of the stories of personal encounters with Jesus. It was an encouragement to service personnel in their most challenging times.

In our first reading of St Paul’s letter to the Thessalonians, we hear about how faith in Jesus brings us hope and trust that we will rise to be with Him in heaven and be re-united with our loved ones who have died with a faith in Him. Our reading from Matthew warns us about being ready and prepared for when we meet with Jesus so that we do not miss out.

In times of conflict the padre has played an important role in supporting and encouraging personnel and speaking of that hope into their situation. Sharing of Jesus’ sacrifice of love on the cross and his understanding of the trials and challenges in our lives.

In the first world war, Geoffrey Studdart Kennedy aka Woodbine Willy became well known for offering Woodbine cigarettes as well as spiritual aid and comfort to injured and dying soldiers. In other locations, Church Army provided spiritual encouragement to soldiers on the front line….as we hear reported by a letter home from one young evangelist…

Church Army Evangelist (1917) “I am a speck of black in a huge sea of khaki. I have two soldiers to help me. I sleep on the floor. The mud is awful; I very soon had to invest in rubber trench boots to the thighs. I have to wear continually a satchel containing two gas helmets; you see the gas rolling along in a distant cloud when it’s coming.

I have a kitten I found, with blood on its body and one eye shut amongst the ruins; it’s growing into a big cat, shares my rations, sleeps beside me and helps me with the rats which were bigger than itself at first… the men make a great fuss of it.

I’m proud of Church Army at the front. It makes one feel proud when one hears a soldier who has come in say, ‘Thank God! Another Church Army Hut’…

And judging by the men I have been amongst, there’s a bit of real religion and recognition of God at the bottom of them all. When the crisis comes, the soul does turn to its Maker.

The completed poppy is picked up and the new centre with “Jesus” written on it is added.

As we come together to celebrate communion in this service today, we re-member the sacrifice of all those service personnel at the same time as re-membering that we are followers of Jesus. As we place our poppy at the foot of the alter where we will later gather to remember Jesus in the sacrament and remember his sacrifice for us upon the cross  – we give thanks for the sacrifice of many alongside his perfect sacrifice that gave us  the sure and certain hope that we, and all the saints that have gone before us will be united with him in heaven.

Later, during Communion, Arvo Part’s deeply reflective “Spiegel im Spiegel” was played by Misha and Carol P. It is offered here as an aid for personal Remembrance at home: