What do we think of when we hear the word “community”?

Do we think of our families, our schools, our church or groups that we belong to? Is it a sense of people that we already know or could it be a wider group of people linked in some way that we are yet to meet?

The readings today are inviting us to consider just what community might be to us. We gather today from our communities of family, workplace and geography to become part of a wider community of those sharing the Christian faith from which we draw strength, become re-energised in our faith and affirm an important part of our own identities as ourselves, rooted in each of the smaller communities that we are part of yet part of something much greater defining us as children of God. 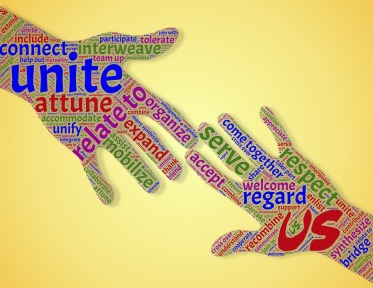 Grouping together in communities has been an instinct from the beginning of time where people share the responsibilities and burdens of survival. In tribal cultures, people gain their identity from the group more than from their individual identity and accomplishments. We are stronger together. If we fly solo in life we are more likely to drop off the radar and become disconnected from the things that bring us life. God did not create us to be solitary beings.

In Jesus’ times there were, likewise, many communities in which people identified themselves – people were Jewish, Roman, Samaritan etc and all of these groups were living alongside each other under the Roman conquest. As we know, Jesus identified himself as a Jew as he walked and ministered amongst the Jewish people calling them back to God.

This season of Easter gives us a specific definition of being a community that believes in God as revealed through Jesus Christ. Just as we say the response

“Christ has died. Christ is risen. Christ will come again.”

in the Eucharistic prayer, these are the beliefs that separate Christians as a distinct community – the community for whom John wrote his gospel.

John’s gospel was written over a period of time to address some of the pastoral needs of the community which was struggling to separate itself from Judaism as practised in the first century. There was a lot of turmoil at the time as the Jewish temple had been destroyed and the early Christians were being persecuted and martyred for their beliefs. As the very least, early Christians were expelled from the synagogue.

And there were many other religious beliefs around at the time that were causing confusion and blurring boundaries. John’s gospel was therefore written for this particular community in their particular time and place reinforcing the core truths of their faith and the relationship with Jesus that is the core of our faith. John’s gospel has accounts of such beautiful and personal encounters with Jesus he is wanting us to understand that relationship with Jesus, our brothers and sisters in Christ and God the Father are the core of our faith and our being.

This passage takes place after Jesus has washed the disciples’s feet as he prepares them for his death and resurrection. They have been on an incredible journey together. They have walked alongside Jesus and talked with him, witnessing incredible miracles on the way ….been converted by him…..they love him. They certainly don’t want this journey to end.

As he warns them about his impending death and says “Do not let your hearts be troubled” there must have been a few incredulous looks in the room! Of course their hearts were troubled. The storm clouds were gathering around them.

Then, in response, we have those famous words of encouragement and hope: “ 2In my Father’s house there are many dwelling-places. If it were not so, would I have told you that I go to prepare a place for you? 3And if I go and prepare a place for you, I will come again and will take you to myself, so that where I am, there you may be also”

In Jesus’ times, when a member of a family married, a new room would be added in to the family home to accommodate the happy couple. As families grew and children were born, the house would become like a compound where new members were welcomed into the community of the family. This would have been such a relevant image for Jesus’s listeners. He is telling them that, through him, they and all Christians were to be embraced into God’s family and the mansion of his Father’s house. That God loves and includes all of us because his heart is a mansion that expands and makes room for all of his children. As Christians we are all invited to that heavenly home. It is what makes us distinctive. It is the fresh hope of eternal life to be won through him that Jesus is alerting them to.

Society still has many religions and philosophies swirling around. Some have described it as a pick and mix approach to faith and spirituality. There are tensions as we ask ourselves how do we make ourselves distinctive in all the melee as Easter people without throwing stones at other beliefs?  We are blessed to not be persecuted for our faith in this country as Stephen was in our reading from the Book of Acts. Stephens’s faithfulness compelled him to behave differently from the rest of society, to forgive those that persecuted him even as he died meaning that he was mirroring Jesus’s spirit just as he asked God to receive his own. God calls us too to be dramatically counter cultural and to stand firm in our belief in him in our own ways and contexts. Expressing that will mean different things to each of us in our different contexts and personal group of communities.

Today’s gospel gives us some of the answer about how to be Easter people. By knowing Jesus to be God’s son incarnate, we already know the place that he is going to. God and Jesus are inseparable…..he is the embodiment of God….a core belief that makes our community as Christians distinctive.

Because, through Jesus, we know the mansion of Gods heart, we too, are to love one another and keep God’s commandments. To be a community that shares Gods love with others and welcomes them into the mansion of our own hearts. 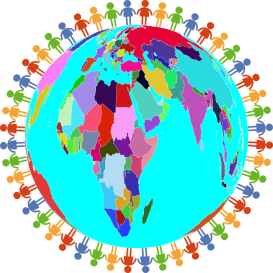 As we continue in this Easter season, let us consider what it means to us to be the community of  people who celebrate Christ’s resurrection in all the communities that we have contact with, to reveal God’s expansive love to those we meet and, like Stephen, to know deep in our hearts, the joy of the place to which Jesus calls us and goes before.