This service was given by Rev Deborah on Mothering Sunday 2017, and was highly interactive! It began with a Mothering Sunday quiz, with the two sides of the congregation playing against each other. The clue was that all answers had something to do with “mothers”:

Just in case you have missed it, today we celebrate what the secular world calls Mother’s Day and what the church calls Mothering Sunday.

There is that unique bind between parent and child, a bond which can sometimes be distorted but for most of us, that bond of love is lifelong. Today we celebrate that bond. We are going to hear about three mothers in different times and places, whose stories are told in the Bible.

My name is Jochebed. I am a slave in Egypt and my son Moses was born three months ago. Pharaoh hates our people so he is killing all the baby boys. I have kept Moses hidden from Pharaoh for as long as I could, but today I had to get him away from Pharaoh’s soldiers. I made a basket out of reeds and tucked him safely inside it. I prayed that God would take care of him and then I let the basket float away on the river Nile, with Moses inside.His sister has run after him to see where God and the river will take him.

My name is Hannah. I was barren and dearly wanted a son. I prayed to God and he gave me my son. I called him Samuel, which means God hears. I promised God that Samuel would grow up in his presence, so when he was very young, I took him to the house of the Lord, the tabernacle, and now my Son is being cared for by the priests there. Every year I go back to take him a new linen tunic. I can see how big and strong he is becoming. 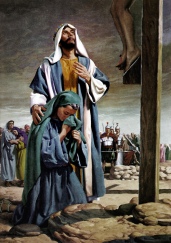 I have always known that my beloved Son, Jesus, does not belong to me. He is God’s son, and I was chosen to be his mother. I remember when we presented him at the temple. An old man recognised Jesus as the Saviour, but said that not everyone would accept him. He talked about the glory my Son would bring God’s people, but he also told me that my heart would be broken. How true. Here I am, in front of my beloved Son, nailed to a cross, bleeding and dying. And yet, in that suffering, he was thinking for me as he said, ‘Woman, here is your son’ and he looked at his beloved disciple. He said to the disciple, ‘Here is your mother.’

Each of those children, Moses, Samuel and Jesus grew up to do great things. Each of them began life with a mother who loved her child, but who had to let him go. Jochebed had to trust her baby to the river Nile and to God’s protection, because she couldn’t keep him safe any longer. Hannah gave her first born Son to God and he grew up with the priests in God’s house. From the moment that Mary knew she was expecting Jesus, she accepted that God’s will for him was more important than anything else.

Love does two contradicting things. Love keeps holding on while letting go. Jochebed, Hannah and Mary are the perfect examples. Letting go is hard whether that is the day your child leaves for university (transient letting go) or more different letting go that takes place between parents and children and ultimately the final letting go.

The son of a friend of mine went to University a few years ago. He was very musical and was always playing on the piano at home.  My friend said that when her son went it seemed as if there was no music in her life anymore – both physically and emotionally. And yet she was able both hold on and let go.

There is a book called ‘Guess How Much I Love You’ by Sam McBratney about Nut Brown Hair and her child trying to describe love. It is similar to a game that mum and I used to play when I was little. Perhaps if we had patented it, we might be well off now.

It is a love beyond infinity, beyond our comprehension that we will be celebrating in just two weeks’ time, the death of Jesus Christ on the cross, the ultimate sacrificial love. This Mothering Sunday we celebrate the love that we have for our mothers and their love for us, but more than that, we celebrate Christ and his amazing love for us. Amen

One thought on “Mothering Sunday”